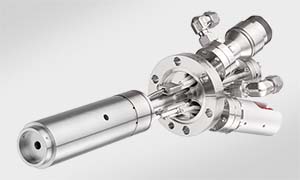 The Oxygen Atom Beam Source OBS is a thermal gas cracker that produces an ion-free oxygen gas beam, thus avoiding ion induced damage to the substrate. It features a very compact design and is easy to install and to operate.
In contrast to oxygen plasma sources based on HF or HV ionization of gas molecules, or gas sources heated by HV electron bombardment, the OBS is heated by a DC operated filament, which surrounds a long cracking tube.
Developed in collaboration with Dr. Karl Georg Tschersich of the Institute of Bio- and Nanosystems (formerly Institute of Thin Films and Interfaces) at Juelich Research, the OBS is an extensively tested and well characterized oxygen source.

The use of a long, slender cracking tube results in a narrow angle distribution of the atomic oxygen beam (typical FWHM: 10-30°) which makes the OBS ideally suited for medium and low gas flux applications (up to 0.1 sccm) on smaller sample sizes or long substrate distances.
Due to its highly efficient oxygen cracking mechanism and the resulting low gas load on the vacuum system, the OBS can likewise be applied in standard UHV, MBE, and ALD systems as a reliable, highly efficient and low cost source for atomic oxygen.

Typical applications for the OBS are:

Surface oxidation
In surface analysis applications as well as in ALD technology atomic oxygen is used for the preparation of well defined oxide surface layers.

Atomic spectroscopy of single atoms
The particle density of about 1011 low energy O-atoms per cm3 near the cell exit allows a wide range of fundamental spectroscopic experiments on single O-atoms.

Several publications to OBS are listed in section References / List of Publications.

is an oxygen atom beam source on DN40CF flange with UHV-length 220 mm and in-vacuum diameter 36 mm.